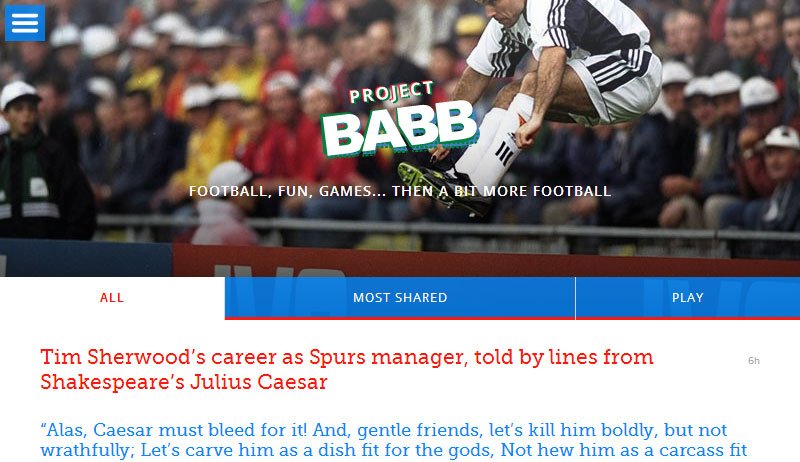 It looks like The Telegraph have noted Trinity Mirror’s success with their popular humour website UsVsTh3m, and the rise and rise of BuzzFeed’s social media friendly content.

Today, The Telegraph launched Project Babb, a new football blog “Conceived as an antidote to po-faced football coverage, Project Babb celebrates the sport and everything which makes it the silliest spectacle on earth.”

They began recruiting for their new blog in March 2014; “If you’re smart, funny and quick at coming up with stuff the Internet likes, you should talk to us”.

It’s notable that it’s Alex Watson (Head of Product for mobile) doing the recruiting as it indicates that The Telegraph is getting serious about attracting smartphone users (mobile is where UsVsTh3m and Buzzfeed get their connected, young visitors from).

The Project Babb blog is not shouting about its links to its establishment parent, “The important thing is we built it quickly and it’s for the editorial team to have some fun with” tweets Watson. The blog’s design also looks deliberately simple – with only a single Telegraph masthead hidden away at the bottom of the page.

So #Babb (yes – it has its own hashtag) is a Telegraph experiment, an agile re-invention of their sports coverage for social media and mobile audiences, that’s gearing up to capitalise on World Cup fever.

Will it succeed? Well it’s only hours old and its most recent story is “Tim Sherwood’s career as Spurs manager, told by lines from Shakespeare’s Julius Caesar”, which suggests they’re going after the better-read football fan.

Jonah Peretti has said: “You’re coming to Buzzfeed’s homepage not for yourself, but to find something to share with someone else.” and there’s surely a highbrow-ish football fan niche that will enjoy basking in the warm glow of a Shakespearian quote or two.

Jonathan Liew – columnist at the Telegraph.